Located in Longueil-Annel, the Boatmen Town is the first area for a lively performance about canal craft.

This museum is above all a memory act for Bargemen gathered within the Waterway Association Museum, created in 1993, which is behind the project. The Boatmen Town came into being thanks to the Two Valleys Communes Community who helped to develop the project in order to make it « a different kind of museum ». 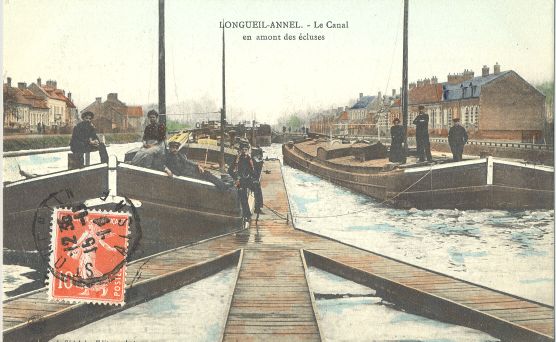 During the 19th century Industrial Revolution Longueil-Annel had been an important port.

The village destiny altered between 1826 and 1831 with the construction of the Oise River lateral canal. The town became rapidly a key stopping place on the fluvial route to Paris.

Even if the golden age of canal craft has ended after World War II, Longueil-Annel is still a stopping place liked by canal and river travellers and a special residence place of retired bargemen.

1900 : The lock was doubled to face to the increasing traffic.

32:  This is the number of drinking establishments and bars set up in Longueil-Annel up to the early 20th century.

Along canal barges were towed by men or horses with collars for a long time.

On the other hand, on the Oise River barges convoys had been formed and towed by steam boats. So the town of Longueil-Annel became a stopping place where convoys were formed and where getting fresh supplies.

Freight markets, towing companies and shipyards had made bubbled the village on a hetic rythm for a long time. 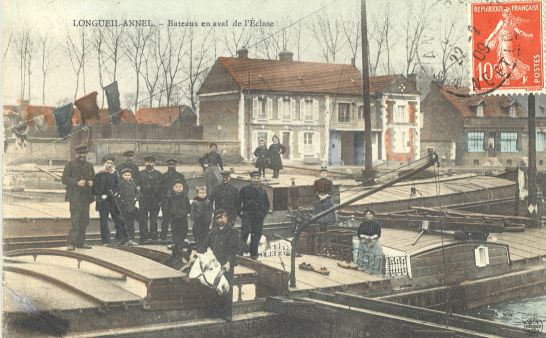 Playing on board barge

Children were tied with a harness so that they couldn’t fall into the water. Many of them learnt to ride a bike or to play football in an empty hold.

Without seeing their parents for 6 months…

From the age of 6, a bargee child could learn driving the boat.

Each side of bargemen life is linked to the barge. On board they were often born, they started walking, they learnt their job and then they had got their own boat. Always moving in a sedentary world, everyday they live adventure.

Getting fresh supplies for the long days of navigation, finding a doctor who would accept to go on board, fighting against the ice which threatens the hull, looking after the children… Everyday life problems are most different from those of « the ashore people ».

« It’s in our blood, we can’t help it. It’s in the family, from descents to descendants. » 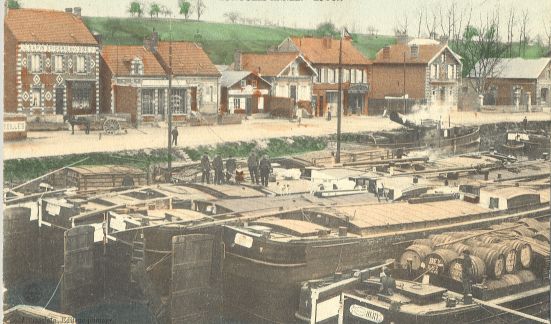 But the competition of railway appeared and difficulties began for bargemen who had to « defend his freelance worker’s freedom ». In the same time, bargemen had to face to important variations in freight prices.

The first social conflicts began. In 1936, the « work in turn » system –a first step to working conditions improvement- was passed (law of the 18th July 1936 during Leon Blum’s government, the first left-wing government).

At present a thousand of bargemen is registered. Despite of fluvial transport low cost, economy is heading towards road transport. Still important in Northern Europe, canal transport might come back in the forefront with the large size canal project.

Opening of schools for bargees’ children and of specific social offices. 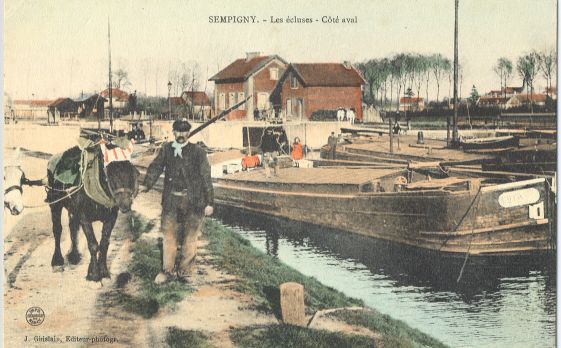 Did you know that…

Until 1970 barges were still towed by horses.

Facing to the increasing number of ships types used in fluvial freight transport, Charles Louis de Freycinet (1828-1923), Minister for Civil Engineering, passed in 1879 a decree which set the same size for all waterways.

During the 19th century, fluvial transport combined traditional towing with warping tugs and towing boats. The steam and later the electrical tractor use opened up the way for modernity. The combustion engine invention represents one of the last greatest revolutions for bargemen : from then on barges are automotive and free to go where they need and when they need.

Did you know that…

Indeed engineers combined art and science resources to enable boats to clear differences in landscape level and reliefs. For instance :

Don’t miss the speaking posts along the canal banks. Living on board barge is not living isolated from the « ashore people » world. Lock crossing, towing path, bars, shipyards and celebrations or fairs are all occasions of exchanges and meetings. 5 speaking posts broach these themes with resonant testimonies.

On the 3rd week-end of July : the Museum birthday

In December : temporary exhibitions in the Museum

To end your visit, enjoy the sight on the lock operating and, still along the canal banks, just stroll to discover the 10 commandments of bargemen (for example : greet the passing boat, keep your barge in good repair…)